How To Change Behaviour.

This is a summary of a meta-analysis of research on how to change behavior. The original paper was published in February 2019 by Angela L. Duckworth, Katherine L. Milkman, and David Laibson: ‘Beyond Willpower: Strategies for Reducing Failures of Self-Control’ and authored.

The paper covers evidence for 21 ways people can change behavior. The strategies were categorized in two ways: The first category was based on whether you were trying to change your own behavior or someone else’s behavior. The second category was whether the changes were to someone’s perspective or their environment. 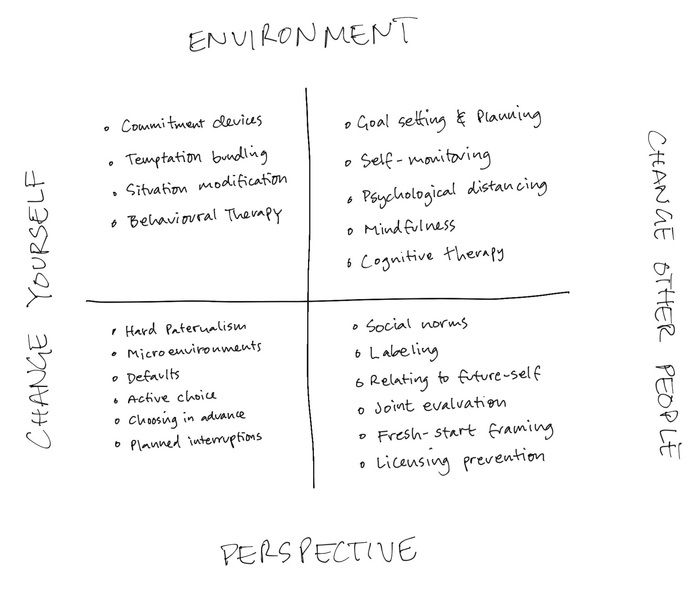 Ways to change your behavior by changing your environment: #

A commitment device is any kind of mechanism that helps you stick to a decision about the future. For example, downloading some kind of software that stops surfing the web for more than an hour a day.

Commitment devices can be useful because people tend to make more self-controlled decisions about the future than the present. For example, people tend to make healthier food choices when they pre-order lunch for the next day over-ordering food at lunchtime (Milkman, Rogers, & Bazerman, 2009, 2010; Read & van Leeuwen, 1998; VanEpps, Downs, & Loewenstein, 2016a, 2016b).

The idea here is that you can stick to a commitment by voluntarily eliminating options they would otherwise have been. These self-imposed constraints can improve welfare because they prevent (or dissuade) people from undertaking self-defeating behavior.

Some evidence for these claims:

In one field experiment, people were offered savings accounts where people could only withdraw their savings after a self-selected date or after reaching a savings goal. After a year people’s savings were 81% higher than those of customers who were offered a standard account (which paid the same interest rate) (Ashraf, Karlan, & Yin, 2006)

In another experiment, employees could put money on the line that they would lose if they did not visit the gym at least once every 2 weeks. Gym visits by 25% over an 8 weeks period (Royer, Stehr, & Sydnor, 2015). However, in another experiment, smokers hoping to quit put some money in a savings account, if they failed a nicotine test after 6 months, they lost the money to charity (Giné, Karlan, & Zinman, 2010). This time they were only 3% more likely to pass their urine test than smokers who were not offered access to this commitment device, which might suggest giving money to charity reduces the impact of losing money.

Temptation bundling is the idea of combining indulgent activities with more self-controlled behavior. Like letting yourself watch tv when you spend time on an exercise bike.

There only seems to be one field study that directly tests the benefits of temptation bundling, so more work is needed. However, this study showed people exercise more if they only let themselves listen to audio novels they like when exercising (Milkman et al., 2014).

Situation modification just means removing temptations from view rather than trying to actively resist them.

Two field studies looked at groups of students who either removed the distractions from their environment or relied on willpower to ignore distractions. Both studies reported that students who modified their environment to remove temptations reported better study quality and more effective achievement of their study goals in the following week (ds = .56 to .63; Duckworth, White, et al., 2016).

While promising, these studies relied on self-reports and short-term goals. So studies with longer follow-up periods and more objective outcomes could improve these findings.

Using behavior therapy for addiction and other impulse control problems dates to the 1950s and 1960s (O’Donohue, Henderson, Hayes, Fisher, & Hayes, 2001; Thoma, Pilecki, & McKay, 2015). Behavioral therapy changes behavior by recommending the avoidance of situations that contain triggers and reinforcers of the behavior that you want to change. Likewise, extrinsic rewards (like praise from loved ones or payments for “clean” blood or urine tests) can be used to reinforce a new behavior.

Typically a therapist helps someone specify a problematic behavior (excessive drinking) as well as a healthier alternative behavior ( jogging) and their associated triggers, rewards, and negative consequences. Between sessions, people attempt to transition from the problematic behavior to alternate behavior. For instance, an alcoholic trying to regulate his or her mood might work with a therapist to develop a jogging routine—which includes plans to avoid or create triggers.